Does a fairy-tale ending always guarantee Happy Ever After?

England 1814: Brought up by her late grandparents after the death of her mother, Lallie Grey is unaware that she is their heiress. When her father realises that he will soon lose control of his daughter’s income, he conspires to marry her off to his crony, Frederick Malvin in exchange for a share of her capital. But Lallie has fallen in love with Hugo Tamrisk, heir to one of the oldest titles in England.

When Hugo not only comes to her aid as she flees the arranged marriage, but later proposes to her, all Lallie’s dreams have come true. She readily agrees to marry him at once. But past events casts long shadows. Hugo resents the interest his three elder sisters take in his new wife and thinks they have turned her against him. And then there is his former mistress, Sabina, Lady Albright.

As Lallie finds her feet in the ton, the newly-weds are caught up in a comedy of errors that threatens their future happiness. She begins to wonder if he has regrets and he cannot understand her new reserve. A perfect storm of confusion and misunderstanding leads to a final rupture when Lallie feels she has no choice but to leave. Can Hugo win her back? Will there be a second, real happy end for them? 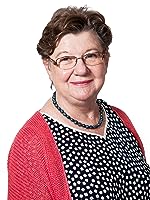 I was born and educated in Dublin. Following a three-year courtship conducted mostly by letter, I moved to Germany where I lived for over twenty-five years before returning to Ireland. I have worked in the Irish and New Zealand public services and in the private sector. I have a keen sense of history and of connection with the past which so often determines the present. I am fascinated by people. I love a good story, especially when characters come to life in a book.
I have always enjoyed writing, I love the fall of words, the shaping of an expressive phrase, the satisfaction when a sentence conveys my meaning exactly. I enjoy plotting and revel in the challenge of evoking a historic era for characters who behave authentically in their period while making their actions and decisions plausible and sympathetic to a modern reader. In addition, I am fanatical about language, especially using the right language as it would have been used during the period about which I am writing. But rewarding as all this craft is, there is nothing to match the moment when a book takes flight, when your characters suddenly determine the route of their journey.
My novels are set in the newly created United Kingdom of Great Britain and Ireland during the extended Regency period. The Act of Union between Great Britain and Ireland of 1800, the Anglo-American war of 1812 and more than a decade of war that ended in the final defeat of Napoleon at Waterloo in 1815 are all events that continue to shape our modern world. It was a time of revolution and inspiration, still a patriarchal world where women had few or no rights, but they lived and loved and died, making the best lives they could for themselves and their children. And they began to raise their voices, demanding equality and emancipation.
At the same time, the aristocracy-led society was under attack from those who demanded social and political reform, while the industrial revolution saw the beginning of the transfer of wealth and ultimately power to those who knew how to exploit the new technologies. Come and join me in exploring this world.

Catherine Kullman’s ‘Perception and Illusions’ is a well-written romp through Regency England.  A shorthand way of describing it would be a Cinderella story meets Pride and Prejudice but that doesn’t entirely do it justice.

It is very much a book of two halves.  It opens with the unknown heiress cast into the role of governess in her stepfamily household but when wrongs are righted and she seems to have got her happy ending at only a third distance into the book, you know there is much more to come.  So what happens after the pages of the storybook close?  What happens after the fairy-tale ending?  Do society’s rules and expectations get in the way or can people actually live happily ever after?

Well, it would be boring if I told you; you will have to read the book to find out.  ‘Perception and Illusions’ carries the story past the wedding and follows the ups and downs of Lallie and Hugo’s life together.  Kullman has written this novel from both their perspectives which puts the reader in the interesting (by interesting I mean often infuriating) position of knowing both sides of the story.  We are permitted access to their heads, hearts, hopes and dreams but cannot intervene and bang their heads together.

There are some nice period touches but Kullman does not get bogged down in the detail of history and keeps this novel a light and enjoyable read.  If you are a fan of romance, this is definitely one to bump to the top of your reading list.  Four Stars.