Somewhere Beyond the Sea by Miranda Dickinson

Miranda Dickinson’s Somewhere Beyond the Sea is a sparkling tale of love, life and finding magic where you least expect it.

Selected as one of Heat magazine’s Hot Books – five stars.

Can you fall in love with someone before you’ve even met?

Seren MacArthur is living a life she never intended. Trying to save the Cornish seaside business her late father built – while grieving for his loss – she has put her own dreams on hold and is struggling. Until she discovers a half-finished seaglass star on her favourite beach during an early morning walk. When she completes the star, she sets into motion a chain of events that will steal her heart and challenge everything she believes.

Jack Dixon is trying to secure a better life for daughter Nessie and himself. Left a widower and homeless when his wife died, he’s just about keeping their heads above water. Finding seaglass stars completed on Gwithian beach is a bright spark that slowly rekindles his hope.

Seren and Jack are searching for their missing pieces. But when they meet in real life, it’s on the opposing sides of a battle. Jack is managing the redevelopment of a local landmark, and Seren is leading the community campaign to save it.

Both have reason to fight – Seren for the cause her father believed in, Jack for his livelihood. But only one can win. With so much at stake, will they ever find what they are really looking for?

Miranda Dickinson has always had a head full of stories. Born in 1973 in Wolverhampton, she grew up in Kingswinford and dreamed of one day writing a book that would reach the heady heights of Kingswinford Library… Her first novel, Fairytale of New York (2009) was discovered on Authonomy.com – HarperCollins’ site for unpublished authors. Within three weeks of its release, Fairytale of New York had entered the Sunday Times Top Ten Bestsellers List, where it remained for five weeks – making it the world’s first crowd-sourced bestseller. The novel was also shortlisted for the RNA’s Romantic Novel of the Year Award 2010 at the Pure Passion Awards.

Miranda is a six-times Sunday Times Bestseller, with Fairytale of New York, Welcome to My World, It Started With a Kiss, When I Fall in Love, Take a Look at Me Now, I’ll Take New York, A Parcel for Anna Browne and Searching for a Silver Lining. Her new Christmas novella, Christmas in St Ives, is a festive treat and also a prequel to her ninth novel, Somewhere Beyond the Sea, which publishes in June 2018. She is an international bestseller in four countries and her books have been translated into fifteen languages. To date, she has sold one million books worldwide. She is currently writing her tenth novel.

Miranda lives in Dudley with her husband, Bob and daughter, Flo. She is also a singer-songwriter and recently released her first solo album, About Time.

What book from your childhood still has a place in your heart today?

Anne of Green Gables by L. M. Montgomery. I adored Anne Shirley’s passion and conviction. I wanted to be her so badly when I read the book!

Which fictional character stayed with you long after you finished the book?

Elizabeth Bennet. I re-read Pride & Prejudice every year and I adore Lizzie’s wit. She’s startlingly modern as a protagonist and so vividly drawn in the book.

Can you tell us a little about your journey with your new release?

This book has been the biggest emotional journey, which is why I think I’m so in love with Somewhere Beyond the Sea. I’d submitted the synopsis to my publisher and had been given the green light to start writing, so Seren was always going to be grieving for her father. But then my lovely Dad, champion of everything I’ve ever written, was diagnosed with late-stage bowel cancer and very quickly passed away. I was in the middle of promoting my last book, Searching for a Silver Lining, and had to carry on despite my world being shattered. I was determined to write Somewhere Beyond the Sea in his memory, not least because he loved St Ives and had been so excited about me writing a book set there. Six weeks before he died, he’d had his last holiday in St Ives, before he found out he was ill, which was another reason to carry on.

For a long time, I could only write Jack’s chapters and started to panic that I’d never be able to complete Seren’s side of the story. But then a friend suggested I ‘cast’ someone else as Mark MacArthur, Seren’s dad. I found a photo of the actor Ciaran Hinds on Google, printed it out and carried it everywhere with me, so I knew that when I was writing about Seren’s dad it wasn’t my Dad. I made Mark ten years younger than Dad, gave him a different appearance in the story and eventually Seren’s story started to flow.

An early reader tweeted me recently to say she felt the whole book was a heartfelt love letter to my Dad and I was blown away that she’d seen that in the story. The scene in Somewhere Beyond the Sea where Seren and Jack have their first heart-to-heart about losing someone is the scene I’m proudest of writing in my whole career because it was the first time I dared to explore what grief meant and where I was with it. What’s come out of the whole experience is an uplifting book about hope, of magic; of all the special things we share with people we love and of the ability of those things to appear when we most need them. And Dad has a cameo in the book – you might just spot him running around The Island path, very much alive and happy. I think he would have liked that!

Do you get an emotional connection to your characters?

Always! It varies from book to book, but spending the best part of a year with my characters makes me get to know them like friends. With Somewhere Beyond the Sea, I totally fell in love with Seren and Jack from the very beginning. It took me by surprise how completely I was drawn into their world – also how that feeling has remained through the editing process. Usually, by the time publication day arrives, I’m exhausted from spending so much time with my characters and ready to let them fly out into the world. But I’ve had Seren, Jack and their world in my head for almost two years now (the publication date moved from last autumn to this June, so the book has been complete for what feels like a long time), so I feel hugely connected to them. After completing the novel I then wrote the prequel novella, Christmas in St Ives, which was published in ebook last November, and it was such a joy to get to spend more time with Seren and her friends – also to tell the story of what happened just before Somewhere Beyond the Sea begins. I can’t deny the fact that I am utterly in love with this book and hugely proud of it.

Calling Major Tom by David M. Barnett. It’s a brilliantly comic and heart-warming tale of a man who has given up on life and the unconventional family who help him rediscover his heart. I hugged it when I finished reading, which is the sign of a wonderful book for me! 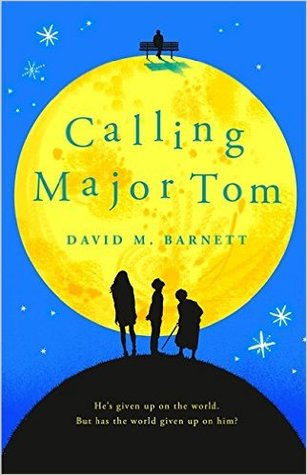 If your book came with a theme song what would it be?

That’s very easy to answer – it would be The Star That Guides You Home by Emma Stevens. It was actually the working title of Somewhere Beyond the Sea and the song inspired the atmosphere and feel of the story.

Is the genre you write your favourite to read?

I don’t know that I have a favourite genre to read. I just love great stories, so I will try anything. While I’m writing a book I try not to read anything too closely related to the story I’m telling, more out of panic of finding an identical book already published, or unwittingly assimilating ideas from other books into my work-in-progress, than a strict reading choice. I’ve been reading a lot of crime thrillers and fantasy books recently – I love the pace and scope of both genres and that inspires me to push boundaries with my own books. I’ve always loved Sir Terry Pratchett for his humour and writers like Sarah Addison Allen and Neil Gaiman for refusing to conform to labels. I just love a story that I can fully enter into, that captivates me.

If you could ask your readers anything, what would you want to know?

What a great question! I’m very lucky that my lovely readers often chat to me on social media and tell me what they like and don’t like about my books. What fascinates me as an author is how the characters in my head and on the page come across to my readers. So I think I’d want to know how they picture my characters – who they would cast in the film of the book? Also – if I can be cheeky and ask two questions – I would love to know if they ever quote any lines from any of my books. I do that all the time with books I’ve read (and films I’ve watched), so I would love to know if there are any lines that have particularly stuck with my readers.

I’m currently working on something very different, which is almost finished and ready to send to my agent – eek! And then next month I’ll start work on my tenth novel. I’ve already written the first few chapters and love the characters that are emerging. So it’s all exciting!