With a song in your heart, soldier on…

Connor Montrose is running for his life. All that he held dear has been ripped away. Every Western intelligence agency and all the police forces of Europe are looking for him, with orders to shoot on sight. The only man who can prove his innocence is the man that most wants him dead. Only one woman, a Mossad sleeper in Paris, will stand by his side. With her help, he must now turn and fight.

His journey of evasion and revenge take him from hidden Holocaust bank vaults in Zurich, to the stinking sewers of Paris and dust-choked souks of Morocco. Finally, in the back streets of Tehran, under the gaze of the Ayatollahs, he has the chance to end it, as it began. In blood. 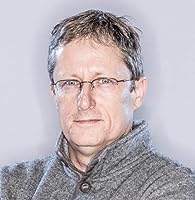 Mark Leggatt was born in Lochee, Dundee and lives in Edinburgh. A former specialist in Disaster Recovery for oil companies and global banks, his career has taken him around Europe, especially Paris, where he lived for a number of years. History and modern global conspiracy lie at the heart of his work, and are the backdrop for the adventures of CIA technician Connor Montrose. Leggatt is a member of the Crime Writers Association in the UK, and the International Thriller Writers in the USA.

The cover of Mark Leggatt’s ‘Names of the Dead’ tells you pretty much everything you need to know. Hints of a Europe turned upside down by war. Documents of spindly handwriting more or less hidden but behind everything. A strong, bold character at the centre but someone else pulling the strings. Hints of nail varnish; is a woman involved? Bright red; blood?

Cinematic in scale, this story tears around the streets of Switzerland and Europe at breakneck speed. Back exits, outfit switches and all the action you would expect from a full-blown spy romp. There is violence but, barring a slight over-fondness for optic fluid, nothing too gratuitous. There is also a nice sense of realism in some of the details of buildings, places and customs (Italians really don’t have milky coffee after 11am!) which is important in grounding the story and making the reader believe.

I have one criticism. As good as this book is, it has been done before. It is of a type, a genre and if that is your thing you will love it. I enjoyed it very much but would love to see what Leggatt could do with something more original. Perhaps a wander down a dark alley that is entirely his own.  4 Stars