Pop the party poppers, we are kick-starting the Last of the Summer Moët #Blogtour. Written by Wendy Holden and published by Head of Zeus Books. This humours tale with its stunning cover is a must for the start of year blues.  Wendy has some questions for her readers in our interview. It would be lovely if you could leave your answers in the blog comments and we will Tweet them to Wendy.  It’s a lovely feature and I adore Wendy’s book picks. Thank you so much to Wendy Holden for taking part, I am so honoured to have you on my blog.

She’s discovered a super-exclusive English village where the rich and famous own weekend retreats. Where film stars, Turner-prize winners and Cabinet ministers park their helicopters outside the gastropub and buy £100 sourdough loaves from the deli.

Outsiders are strictly forbidden. But luckily Laura’s best friend Lulu, a logo-obsessed socialite with a heart as huge as her sunglasses, suddenly fancies a quiet life in the country. The door to this enchanted rural idyll opens for Laura. Revealing a great professional opportunity.

Can Laura write an exposé before the snobbish villagers suss her true identity? And before the world’s poshest pub quiz triggers a political scandal not seen since Profumo?

My favourite book as a child was an autobiography written by the late great Enid Blyton, whose output was as prodigious as her stories, especially the school ones, were addictive. Enid painted a tempting picture of life as a writer. She had a fabulous house with a tennis court, a fabulous tanned, dishy husband and a pair of fabulous daughters who had horses. I was desperate to emulate her and be fabulous too, and how could I fail, as Enid made it all sound so easy. She claimed that all she did to write was go and sit on the swing seat in the garden, close her eyes and the story and characters would appear instantly. Mug that I was, I believed it all and only when I started writing a book myself did I realise it required slightly more than that. Bad Enid and her porky pies! 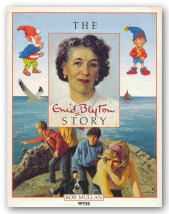 I dedicated Last of the Summer Moet to my parents. My father died recently so I wanted to dedicate it to his memory. He was a very funny person, and would, I hope, have appreciated all the jokes and fun in Moet. My mother would just appreciate the Moet. She has always been a champagne fan and I must get my love of the stuff from her.

Last of the Summer Moet is a comedy set on a glossy magazine. I used to be deputy editor of both Tatler and the Style section of the Sunday Times so I have a lot of wonderful material to draw on. You really couldn’t make up some of the ridiculous things I have seen and heard. In the novel, Laura Lake is editor of a glossy mag called Society. She is researching an article about Britain’s Poshest Village, so I was able to bring my experience of fashionable rural life into the story. I’ve lived in the country for some years; my home is a Victorian former gardener’s lodge shaped like a little fort. I call it my ‘starter castle’. It has a large garden and I could bore you to death about dahlias and growing my own salad.

I’ve read some brilliant books in 2017. I’m a literary critic for the Daily Mail and I also chaired the judges of the Costa Book of the Year for 2018.  Reservoir 13 by Jon McGregor, about the aftermath of a teenage girl’s disappearance in a Derbyshire village.

Madame Bovary by Gustave Flaubert would be one. It’s a masterpiece on so many levels, not least the fact that the characters are so unlikeable, even Emma, the heroine. Her solution to being stuck in the depths of the countryside is to spend like a maniac and have lots of affairs; this ends in complete disaster and her end is one of the worst in all literature. Anna Karenina, another huge favourite, is a variation on the same theme of the ruined woman, but Tolstoy approaches it completely differently and is not judgemental about his characters. My most favourite novel of all though is probably The Great Gatsby by F Scott Fitzgerald. It’s a story of pure and untarnished love set in a glamorous, seedy world.

I worked as a journalist for many years and wanted to write a novel, but I didn’t have a subject.  My job as deputy editor of the Sunday Times Style section included ghost-writing a column for the late socialite Tara Palmer-Tomkinson.  I ended up inventing most of it which was wonderful training. The column appeared every week, so I was in effect writing a serial novel. Tara became very famous on the back of it, which was slightly exasperating as no-one realised it was me who was writing it.  But then I realised that here, staring me in the face, was my plot. The novel was Simply Divine, a comedy about a downtrodden hack ghostwriting a celebrity socialite’s newspaper column. It was a kind of newspaper Cinderella story.  It became an instant bestseller and was even optioned by Hollywood. Tara Palmer-Tomkinson launched my writing career, in other words, and I never looked back.
What would you like your readers to know before starting your book?

That it’s the second in a comic series. Three Weddings And A Scandal is the first, in which we meet Laura for the first time and follow her efforts to get a job on a glossy magazine. She’s so desperate she lives secretly in the fashion cupboard and survives on party canapes. I’m writing the third at the moment, in which Laura goes to Scotland. It’s called A View To A Kilt. 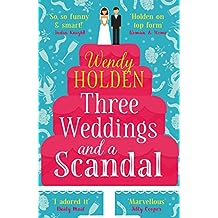 I’d love them to tell me what they think of Laura and her adventures. I’m hoping they’ll like her; she’s brave and loyal as well as funny. I hope they like her friends too; there are three main ones. Lulu, a billionheiress socialite, is plastered in designer logos but has a heart of gold. Caspar is a self-obsessed actor who drives Laura mad, but he’s so funny and so handsome she finds it hard to resist him. Finally, there is Mimi, Laura’s French grandmother, who is full of Parisienne wisdom about being beautiful inside and out. If readers have any more Mimi-style tips, I’d love to hear them!