Today author Jackie McLean stops by and takes part in my Inspired By feature. Jackie is the author of the  DI Donna Davenport series. Toxic and Shadows are out now on Kindle and paperback. The third instalment is coming soon.

Here’s a look at Jackie’s books. 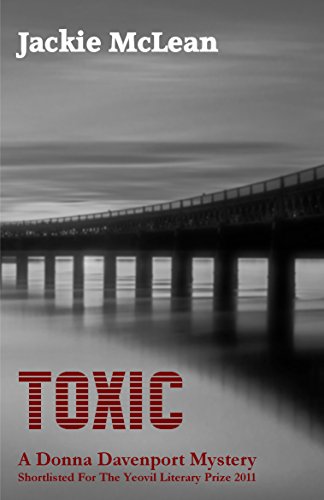 -Back of the Book

In the Scottish university city of Dundee, life and all its complications are proceeding much the same as usual.

The recklessly brilliant DI Donna Davenport, struggling to hide a secret from police colleagues and get over the break-up with her partner, is in trouble with her boss for a fiery and inappropriate outburst to the press.

DI Evanton, an old-fashioned, hard-living misogynistic copper has been newly demoted for thumping a suspect, and transferred to Dundee with a final warning ringing in his ears and a reputation that precedes him.

And in the peaceful, rolling Tayside farmland a deadly store of MIC, the toxin that devastated Bhopal, is being illegally stored by a criminal gang smuggling the valuable substance necessary for making cheap pesticides.

An anonymous tip-off starts a desperate search for the MIC that is complicated by the uneasy partnership between Davenport and Evanton and their growing mistrust of each other’s actions.

Compelling and authentic, Toxic is a tense and fast paced crime thriller. Shadows 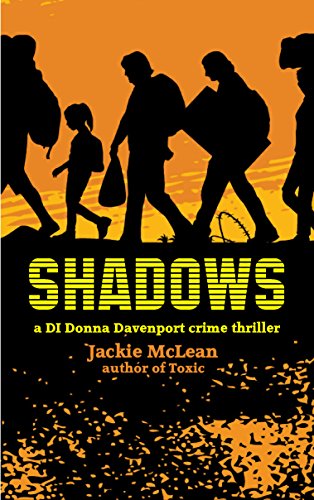 -Back of the Book

When DI Donna Davenport is called out to investigate a body washed up on Arbroath beach, it looks like a routine murder inquiry. Then the enquiry take on a more sinister form.

There are similarities with a previous murder, and now a woman connected to them both has gone missing too. For Donna, this is becoming personal, and with the added pressure of feeling watched at every turn, she is convinced that Jonas Evanton has returned to seek his revenge on her for his downfall.

Fearing they may be looking for a serial killer, Donna and her new team are taken in a horrifying and unexpected direction. Because it’s not a serial killer – it’s worse.

Moving from Dundee to the south coast of Turkey and the Syrian border, this is a fast paced novel about those who live their lives in the shadows, and those who exploit them.

Jackie lives in Glasgow with her partner Allison.  She has a varied background, including being a government economist, a political lobbyist, and running a pet shop.  She started a mathematics PhD counting fish, and currently works with East Ayrshire Council, counting more things.

Jackie has appeared at crime writing festivals Newcastle Noir and Crime at the Castle, and regularly appears at Noir at the Bar events (including Edinburgh, Newcastle, Dundee and Dunfermline).  She also forms part of the Dangerous Dames and Murder & Mayhem along

There are lots of fantastic writers that have had a huge influence on me – Denise Mina, Lin Anderson, Chris Brookmyre, to name a very few.  Also outside of crime fiction, Sarah Waters, Fannie Flagg, Barbara Kingsolver and Jostein Gaarder.

But I would like to pay tribute to my English teacher from school days in Arbroath.  She was one of those teachers who just got the joy of English and how to communicate that.  She made literature accessible and opened up the power it has to change minds, lives and worlds.

Although I’ve always written, and by the time I joined that class I’d already written two novels, it was her enthusiasm that made me understand writing is more than making up a few stories.  That it’s about expressing what matters to you, that it comes from the heart, and that every piece of writing has a value of its own.  It was through her that I began to see writing as a healthy outlet for dealing with the issues I felt passionate about.

That meaning has carried with me to the present day, and it continues to be important for me to be able to address matters of social injustice through my writing, where otherwise I might feel helpless to do anything about them.  That’s an amazing gift to give someone, and English teachers really are the unsung heroes in society.

My memory is hazy, but I think her name was Miss Mackintosh, and I’d love for her to know the inspiration she was.

I’d pass on the best advice that was given to me – which was by Dr Noir herself – and that is to get involved with other writers.  In my case, with crime fiction, that’s getting along to regular informal events like Noir at the Bar and to book festivals and book launch events as much as possible.  I’ve found the friendship amongst other crime writers and those involved in crime fiction – bloggers and readers – to be phenomenal support.  The actual writing is only one small part of a writing career.  Much of the rest is about getting to know others in your field and getting yourself known too.

I love reading, and I love discussing books with other readers.  To be able to talk about books that I’ve written myself is simply mind-blowing!

Carl Sagan, “What an astonishing thing a book is. It’s a flat object made from a tree with flexible parts on which are imprinted lots of funny dark squiggles. But one glance at it and you’re inside the mind of another person, maybe somebody dead for thousands of years. Across the millennia, an author is speaking clearly and silently inside your head, directly to you. Writing is perhaps the greatest of human inventions, binding together people who never knew each other, citizens of distant epochs. Books break the shackles of time. A book is proof that humans are capable of working magic.”

Thank you ever so much, Jackie, for being on the blog today.