Mark of The Devil by Tana Collins

Looking for your next unputdownable mystery? Then try this book by #1 best-selling authorTana Collins, a mystery full of stunning twists and turns.

While Inspector Jim Carruthers and team are busy investigating a series of art thefts, they receive an anonymous tip-off about the body of a young woman on a deserted beach. The bizarre clues to her identity and what might have happened to her include a strange tattoo, a set of binoculars and a slab of meat left on the cliffs.

The team’s investigations lead them to a local shooting estate and its wealthy owner, Barry Cuthbert. However, Carruthers suspects Cuthbert is not all he seems and the DI soon starts to wonder if the cases of the missing works of art, the dead woman and the estate are connected.

When the body of a young gamekeeper is pulled from the sea, tensions boil over. The trail of clues lead the team to the unlikely location of Tallinn and into the sinister world of international crime and police corruption.

Needing answers, Carruthers must look further afield than Fife. However, the closer he gets to the truth, the more danger he finds himself in. Since everyone who crosses the vengeful killers seems to end up dead, can Carruthers solve the case with his life intact?

The third instalment of the Jim Carruthers Series has everything a crime fiction fan could ever ask for. Tana Collins has taken the series to the next level with intricate and often complex storylines.

DI Carruthers and his team investigate a series of high-end art thefts. This is itself is a fascinating plot and opens the reader up to the art world most of us have never heard about.

The plot however soon develops into something far more sinister as Carruthers and Fletcher’s investigations lead into a dark world of people trafficking and prostitution. The story moves from Fife to Estonia as Carruthers collaborates with Estonia police after two bodies are found on a Fife beach, one with links to an Eastern European Gang with ties to the mafia. The historical account of Estonia brings charm and intrigue to the storyline and historical fact is intricately weaved throughout this gripping storyline. Some authors make the mistake of overdoing the facts as if feeling they have to divulge every fact relating to their topic. However, Tana Collins has hit the perfect balance giving the reader fascinating titbits about Estonia history, art theft background whilst developing the plot at a very fast pace with plenty of twists and turns.

Jim Carruthers character has been further developed in Mark of The Devil giving it more depth and charm. Details of his background have given him the “human touch” and works well against his “go it alone detective persona”.

I would rate Mark of The Devil a FIVE-star read, un put downable gripping read not to be missed. I can wait for the next instalment as this is a series going from strength to strength.

Enid Blyton’s Famous Five. I loved that series and from the moment I read those books I knew I wanted to create a series that would stay in the mind of the reader long after they had finished the books.

‘Mark of the Devil’ is the third in the Inspector Jim Carruthers series. Timeline- wise it takes place several months after ‘Care to Die.’ Part of the storyline is deeply personal to me as the book kicks off with Inspector Carruthers investigating a series of high end art thefts. Not many people know this but that part of the storyline is based on the deeply distressing experience of my own mother coming face-to-face with masked burglars in her house at the dead of night. They were antique thieves and they got away with her beloved grandfather clock. Perhaps writing about the robbery and putting it in a fictional setting is cathartic.

The action for this third novel starts in Fife but an unexpected turn of events takes Inspector Carruthers to Tallinn in Estonia. I first visited Tallinn in 2011 when I flew over from Scotland to take part in a Summer School crime writing course given by Peter Robinson, author of the DCI Banks series.  From the moment I arrived in Tallinn I knew I wanted this historic city to be a setting for a novel. Little did I know then that it would become the setting for Book 3.

Yes, I do, especially the longer the series continues. I guess, like the reader, I’m getting to know the characters better so that as each book gets written I’m investing more in them. Some characters are more likeable than others but, like a lot of my readers, I have a very strong emotional connection to both Inspector Carruthers and DS Andrea Fletcher. Each of them, for different reasons, has a difficult personal life. What I like is their burgeoning friendship with each other and their determination to put their personal problems to one side in order to bring justice to the victims.

The photo I’m sharing is one I took on my last trip to Tallinn. It is of the now defunct KGB room up at the top floor of the Hotel Viru. I was fascinated to learn that this particular hotel was purpose-built by the Russians in the early 1970s so that the KGB could spy on the guests. Officially the KGB is now long since gone but there are still spies in Estonia and organised crime is a big problem! I wanted to re-create the feelings of anxiety and unsettlement that former guests of the hotel might feel so in ‘Mark of the Devil’ I have Inspector Carruthers staying in this very hotel. Like previous guess he also gets followed during his stay in Tallinn so he knows just how those unfortunate guests that fell under the radar of the KGB would have felt.

Ian Skewis’ A Murder of Crows. I loved that book. 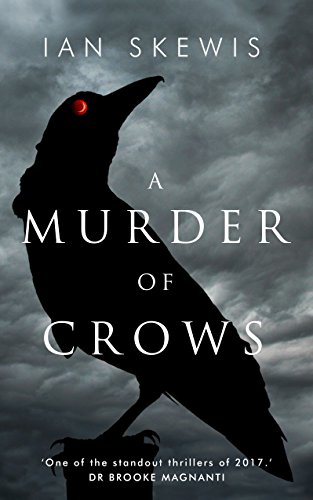 Yes it is. In fact I’m reading nothing but crime fiction at the moment. There are so many excellent authors out there. My particular favourites are Peter Robinson, Ann Cleeves, Alex Gray and Henning Mankell.

I would want to ask my readers what got you reading crime fiction?

I’m actually writing Book 4 in the Inspector Carruthers series whose working title is ‘Dark is the Day’. I’m having great fun developing the characters and putting them through the mill. Not to give too much away but I thought it would be an interesting idea if Carruthers comes face to face with his ex wife! And, if that’s not enough, he’s got a new DCI to deal with. Talking of being unsettled, how will he cope? We’ll have to wait to find out…