The Gardener’s Daughter by K A Hitchins is our feature today. I love the cover, I found it extremely appealing. Released by Instant Apostle on the 15th of March 2018. The book already has 75% five star reviews. We will be reviewing it very soon on the blog. But for now, we caught up with K A Hitchins for a chat.

Motherless nineteen-year-old Ava has always believed brilliant botanist Theo Gage to be her father. But when a chance discovery reveals she is not his daughter, her world falls apart. Determined to discover her true identity, Ava impetuously runs away and enlists the help of the inexperienced private detective, Zavier Marshall. Pursued by shadowy figures, she takes on a new name and follows in her dead mother’s footsteps to work at the mysterious Fun World Holiday Camp. Penniless and cut-off from everything she’s ever known, and trapped in a deadly game of cat and mouse with a ruthless criminal gang, will Ava survive in a world where she’s more valuable dead than alive? Will she discover the shocking truth behind her mother’s death? And will she find her real father before it’s too late?

K A Hitchins studied English, Religious Studies and Philosophy at Lancaster University and later obtained a Masters in Postmodern Literatures in English from Birkbeck College, London University. Her debut novel, The Girl at the End of the Road, was published by Instant Apostle in March 2016, followed by The Key of All Unknown in October 2016. Both books were short-listed for the Woman Alive magazine’s Readers’ Choice Award 2017, with The Key of All Unknown reaching the final three. Her third novel, The Gardener’s Daughter, was released on 15 March 2018. She is married with two children and lives in Hertfordshire.

The Message, which is a translation of the Bible in everyday language by Eugene Peterson. People often have negative preconceptions about the Bible, but it’s surprising when you read it for yourself. It’s really a collection of 66 different books in a whole range of genres: philosophy, poetry, history, parable, personal correspondence and prophecy. It contains some pretty racy stories, a gallery of colourful characters, both good and evil, and some thought-provoking moral dilemmas.

I dedicated the book to my late father, Alec Hitchins, who was a professional artist and keen gardener. Since losing him, I’ve realised what a wise, loving and stable influence he was on my life.  Knowing where you come from plays an enormous part in the formation of your identity and I wanted to write a book about the search for a father and the search for one’s self. When my heroine, Ava, accidentally discovers she’s adopted, she sets off on a dangerous journey, looking for the truth and finding instead a can of worms. She comes to realise what she lost when she left home. I drew on my own sense of grief for my father when writing those passages, so it’s only fitting the book should be dedicated to him.

I drew on my own experiences quite a lot for this book, particularly the chapters set in Fun World Holiday Camp. The descriptions of the cheesy holiday camp entertainers demonstrate I’ve had far too many family caravan holidays!

A large part of the book is set in 2003, before smartphones, Facebook and Twitter. At first I had characters googling things on their phones, which would have been impossible. It’s amazing how much technology has changed and how things we take so much for granted now are relatively modern innovations. Thankfully I have a great editor who helped me iron out some of the anachronisms. This taught me the danger of not doing enough research on the era I’m writing about!

It would have to be Golden Hill by Francis Spufford which ended up winning the Desmond Elliot Prize for debut novels, the Costa first novel award and the Ondaatje prize for books with a sense of place. It’s a rollicking adventure set in eighteenth century New York. The driving force of the plot is Richard Smith, a rich and handsome new arrival with many secrets. Who is he? Why has he come to New York? What will he spend the money on? Is he a political agitator or a fraudulent wastrel – or is he just a young man on an adventure and looking for love? The Bible, as mentioned above.

‘A History of Western Philosophy’ by Bertrand Russell. I read this enormous tome on the train when I was eighteen and commuting to London as a secretary. I was at a stage in my life when I was testing out atheism as a world view. It was only by contemplating the world as a meaningless lump of rock spiralling through space, inhabited by an arbitrary collection of organisms with no intrinsic worth or purpose except to survive at any cost, that I realised that that was not the world I wanted lived in. It was also what inspired me to continue my education through evening classes, eventually getting a place at university when I was twenty-one to read English, Philosophy and Religious Studies.

Lastly, Pride and Prejudice by Jane Austen, because you can never read it too many times.

One of the most important and formative aspects of my writing was that I gave up writing in my late twenties, when I was about halfway through my first novel. I’d dreamed of being a writer throughout my childhood and teens and had always written stories, but I threw in the towel at the age of twenty-eight as a result of a traumatic heartbreak. I no longer believed I had anything to say that was worth listening to. I stopped believing in the magic of fiction and in the happy ever after.

When I married my husband in my thirties, he knew that I’d once wanted to be a writer and encouraged me to take it up again, but I was busy bringing up our children and didn’t want to face my broken dreams again.

Then I had another heartbreak: the loss of my father from cancer. I experienced the most tremendous mental and emotional pressure and started to jot down my feelings at odd moments in the day. At first, this made me more miserable. I read back my personal rants at the unfairness of everything and sounded petty and ungrateful. There were so many others in the world suffering more than I was.

In order to gain some emotional distance, I projected my despair onto a fictional character of the opposite sex. He was in a different situation from me, grieving the loss of his job, apartment and trophy girlfriend in the financial crash, but experiencing similar emotions. Thus the shallow, materialistic character of Vincent Stevens in the Girl at the End of the Road was born.

I didn’t tell anyone I was writing. I didn’t know if I would be able to finish a complete novel. If I was going to fail, I was going to keep it to myself. Within two months the first draft was finished and I plucked up the courage to tell my family. My husband, sister and a couple of friends heroically read it and made encouraging sounds.

I signed up to the HarperCollins online writing community, Authonomy, and sent off my manuscript to agents and publishers. The rejections started to trickle back, Strangely I found that the pile of rejections was toughening me up. My crippling fear of failure and rejection, stemming from the broken romance in my twenties, was disappearing.

What I learned is that doing nothing is much more undermining of a person’s confidence than doing something and falling flat on one’s face. It’s better to be a failure at something you love than to be a success at something you hate.

My manuscript began to get good reviews on Authonomy and I slowly moved up the rankings, finally reaching number four out of over 6,000 books in January 2015. Anyone who reached the top five was supposed to receive editorial feedback from HarperCollins with the possibility of publication, but there was a deathly silence.

In May 2015 I heard back from a small Independent Publisher. They liked the sample I sent in and wanted to see the full manuscript. I emailed it to them on a Friday morning, and by the following Monday, I receive a phone call offering me a contract. I signed immediately. Four days later HarperCollins sent me positive feedback and expressed an interest in the book. Some things are just not meant to be!

The Girl at the End of the Road was released in March 2016. Since then, Instant Apostle has signed my other two books, The Key of All Unknown published in October 2016 and The Gardener’s Daughter’ released this month (March 2018). I have another completed manuscript, which hasn’t yet found a home yet, and am now working on my fifth novel. 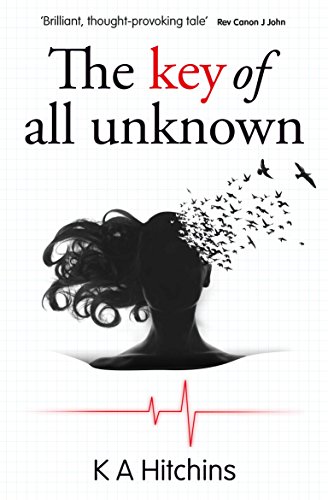 Here’s a picture of our beautiful Rhodesian Ridgeback, Harley, who is my constant writing companion. I walk him for about an hour every morning when I plan out in my mind what I’m going to write that day. For pretty much the rest of the day he snoozes on his bed while I sit at the kitchen table tapping away at my laptop until the children come home from school. He even featured in my first book!

‘The Gardener’s Daughter’ is a young adult adventure, but I think it can be enjoyed by anyone of any age. It can be read as a straightforward story, but it’s also an allegory of our search for love, truth and acceptance.

I would like to ask them if they would consider getting into the habit of leaving book reviews on Amazon and Goodreads, not just for myself but for all authors. It makes such an enormous difference, even if the reviews are not so good. Being a writer can be a lonely job. Knowing there are readers out there and having some kind of connection or feedback makes it all worthwhile.